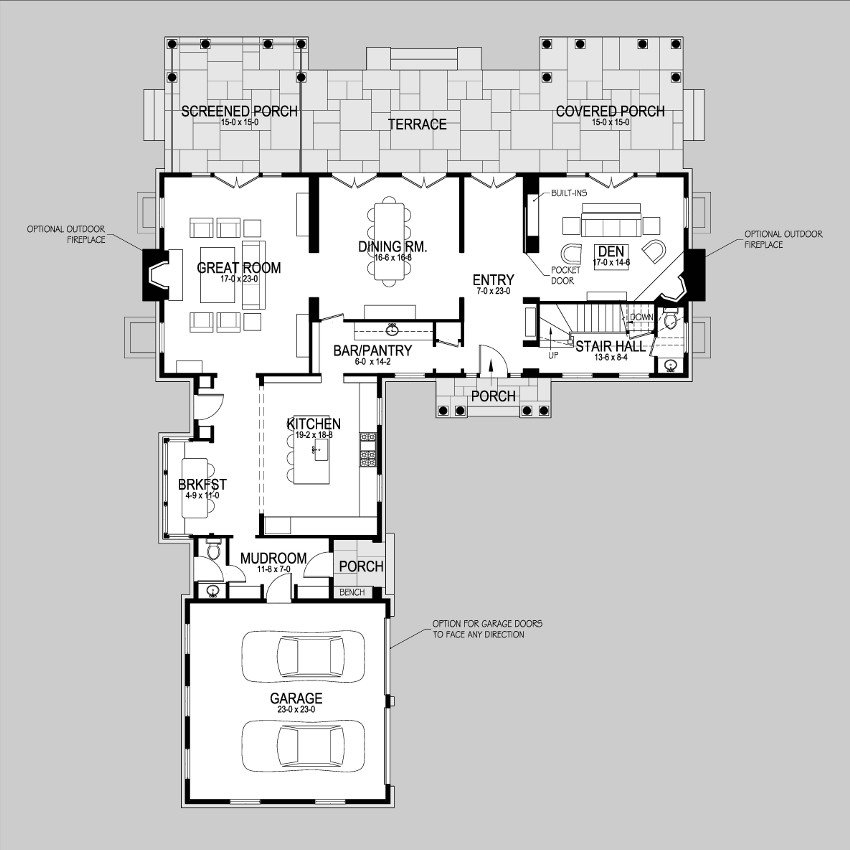 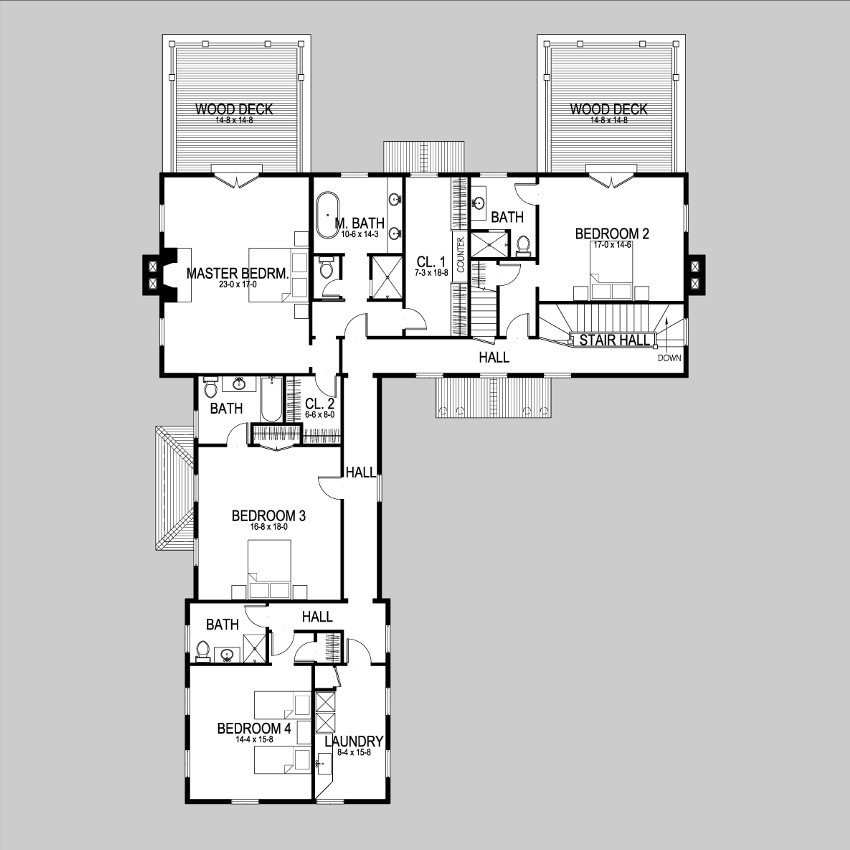 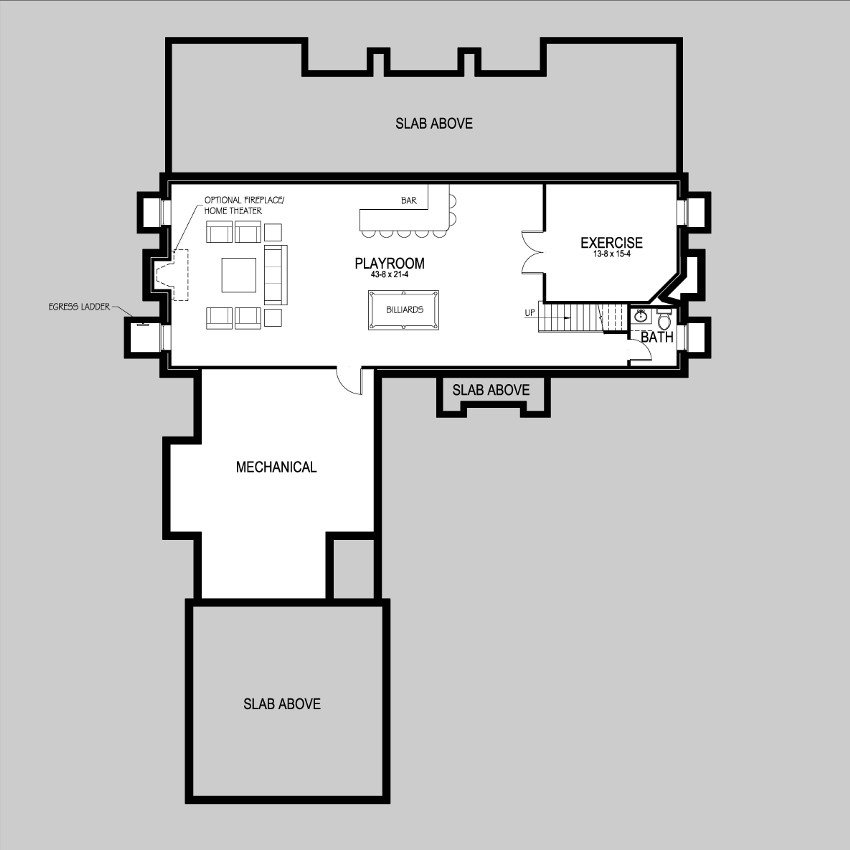 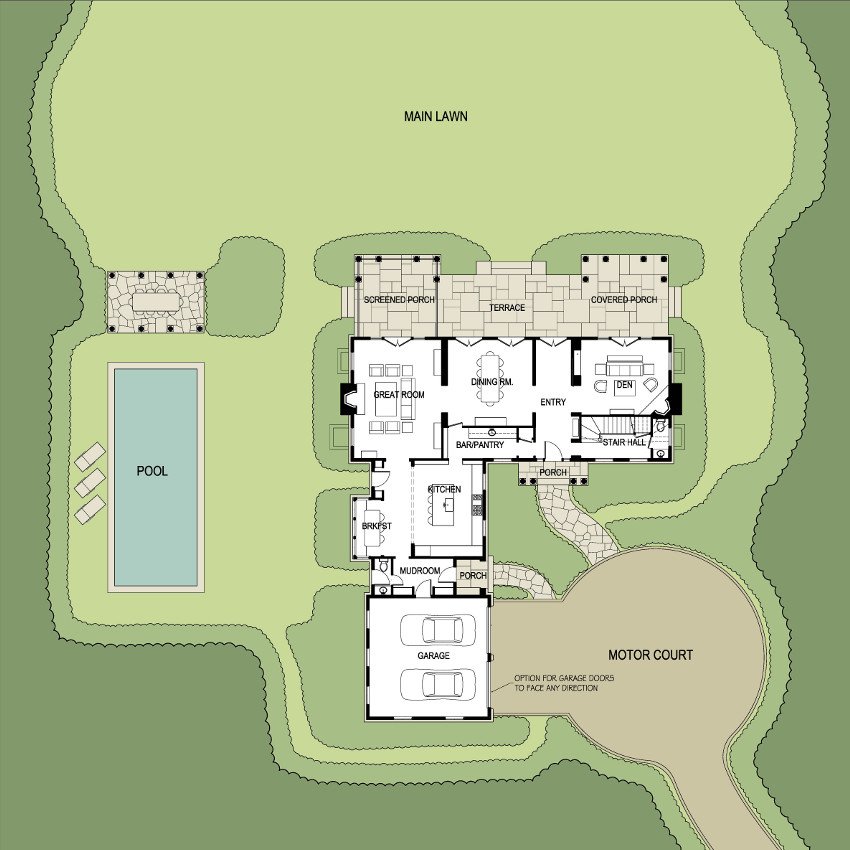 In classic shingle style fashion, Lobster Cove flows outward into a series of garden rooms creating seamless indoor/outdoor living. Approaching the house, the first outdoor room one encounters is a welcoming courtyard space set in the nook of the L-shaped plan. Upon entering the home, one discovers that the entry hall, great room, dining room, and den all connect directly to a large rear terrace that has a sunny central section flanked by two covered porches.

The kitchen and breakfast bay open to a side yard which could feature a small garden or, in wider lots, could be the perfect spot for a swimming pool, play area, or tennis court. On the opposite side of the house, there’s even an opportunity for an outdoor fireplace terrace that could serve as a private retreat with views to the rear lawn.

The garage at Lobster Cove can be adjusted to face in any direction and can be upgraded to three cars.

1st Floor Plan: Like a true shingle style house, Lobster Cove has a layout which is both modern in its open flow and traditional in its strongly defined rooms. The primary rooms have french doors with transoms and huge 7′-6″ tall windows that fill the spaces with natural light and encourage easy flow to outdoor rooms. First floor ceilings are an airy 10′-3″ high which, along with the oversized windows, will give your new home a truly stately feel.

The large great room forms the heart of Lobster Cove and, through wide openings, connects to the kitchen, formal dining room, and a covered terrace. Across the front hall, a cozy den features a fireplace and its own covered terrace. One or both of the covered porch can be outfitted with removable glass or screen panels or with motorized screens.

2nd Floor Plan: Lobster Cove has large windows and 9′-0″ ceilings throughout the second floor. As an option, any space can be made taller with a cathedral ceiling. The large master bedroom has a fireplace and walk-out deck. It also features a bathroom with both tub and shower and two large walk-in closets, one of which has a window.

There are three additional bedroom all of which are generously scaled and have their own bathrooms. One of the bedrooms has french doors to a large deck.

Basement Plan: Lobster Cove is shown here with 1275 square feet of finished space including a large playroom, a bar, an exercise room, a bathroom, and an optional fireplace. Full basements on this website are detailed with numerous full height windows, filling the space with natural light and making it feel anything but underground. Lobster Cove is shown with four large basement windows and additional windows are possible if more finished space is desired. A walk-out basement with french doors is also possible for sloping sites.

A basic plan set includes: Everything necessary for a contractor to build the exterior shell of your home. Unlike many floorplan sites, this includes blow-up details of every exterior condition so nothing is left to the builder’s interpretation.

Unlike almost any other floor plan site, interior detail drawings are also available. These are priced on an a la carte basis as shown in the purchase section of each home. Interior offerings include electrical plans, kitchen elevations, and typical interior trim details.

Drawings are laid out on 24×36 pages. Plans and exterior elevations are drawn at 1/4″ scale, sections and interiors are 1/2″ scale, and details range from 1 1/2″ scale up to full scale.

INTERIOR PACKAGE: Interior elevations of all rooms (including kitchen cabinet drawings) at 1/2” scale and suggested interior details, some up to full scale, showing all moldings, fireplaces, stairs, built-ins, and paneling. (PDF and/or CAD as selected in base package.)

ELECTRICAL PLANS: 1/4” scale plans of the first & second floors showing lighting, outlet, and switch locations. (PDF and/or CAD as selected in base package.)

David Neff is an award-winning New York City architect who specializes in suburban residential projects, new home constructions and renovations. David has been featured in numerous publications and has been profiled as one of the “most sophisticated, young, traditional stylemakers nationwide.”

Like this plan? Check out another
31 plans by David Neff Architect

On David Neff Architect Storefront you can view all their latest house plans, chat and get to know the designer.